The international Forum on Marine Litter and Circular Economy

MARLICE, the international Forum on Marine Litter and Circular Economy was held from the 10th to the 12th of April 2019, in Seville.

The Forum served as a platform for projects in the Mediterranean and Atlantic area to hold meetings as part of their actions, thus contributing with content to the sessions and promoting synergies between different sectors, countries and regions. It was conceived as a cross-sectoral and multi-stakeholder event to advance in the management of marine litter, gathering public authorities, research institutes, private sector and environmental organizations.

Marlice 2019 was necessary to attract interest on the problem of marine litter of the European and International regions, in order to improve the knowledge at transnational level and explore recovery routes of natural areas and waste, within the framework of the circular economy concept.

Marine Litter is a man-made solid waste which, for various reasons, ends up abandoned in marine and coastal environments. It is considered as a proper global environmental challenge and one of the greatest threats to marine biodiversity by the Marine Strategy Framework Directive (MSFD) and the Convention of Biological Diversity of United Nations.

Connectivity through ocean currents makes this a transboundary problem which needs cooperation between countries.

The thematic covered by the conference were:

AQUA-LIT methodology was built on aiming to tackle marine litter covering all of these four topics. Salud Deudero, permanent researcher at the Spanish Institute of Oceanography (IEO) and part of AQUA-LIT was one of the invited speakers at the conference. Salud presented the INTERREG project Plastic Busters, and represented AQUA-LIT promoting the project. 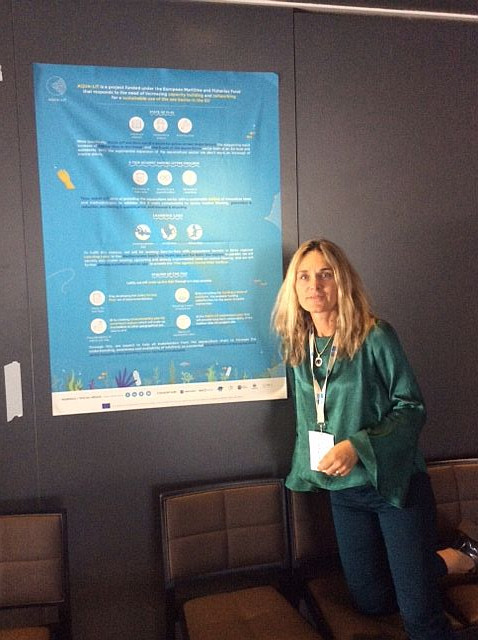